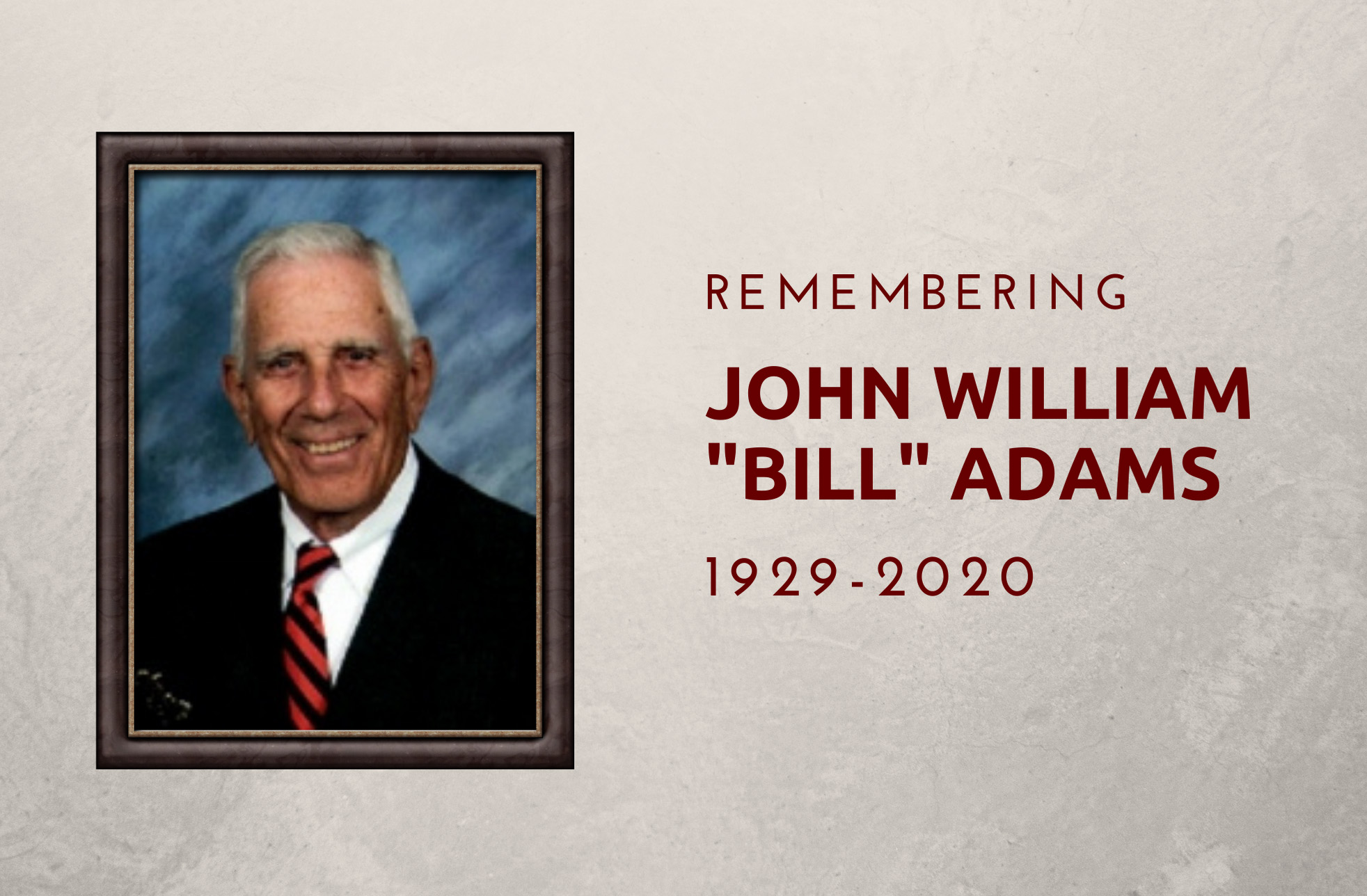 The MSU College of Business is saddened by the loss of John William "Bill" Adams, who passed away on November 9, 2020. He was 91 years old.

A native of Mississippi, Bill was born into a military family and grew up in Army bases throughout the South. He earned a B.S. degree in Management from Mississippi State University where he succeeded his brother, Lester, as student commander of the ROTC battalion. Bill’s active military service included two tours of duty: the U.S. Army’s 11th Airborne Division from 1945 to 1947 and the U. S. Air Force Security Service from 1951 to 1953.

A banker by profession, Bill retired in 1993 as president of United Carolina Bank; he remained chairman of UCB board of directors during the bank’s acquisition by BB&T. He retired as a director of BB&T’s bank board in 1999. During his tenure, he earned graduate degrees from UNC-Chapel Hill and Rutgers University.

Bill participated in professional organizations at the state and national levels, serving as a civic leader in numerous religious, community and charitable activities. He was a 32nd degree Mason, a member of Christ Episcopal Church, a former parishioner of Episcopal churches in Monroe and Sparta, N.C. and a delegate to several Diocesan conventions.

Bill was one of the founders of Monroe Regional Airport and served on the board of Charlotte Douglas International Airport. On the board of the Carolinas Partnership, serving a term as chair, the first to do so not from Mecklenburg County. Additionally, Bill was a committeeman of The Foundation for The Carolinas. He was also a member of the host committee for the 1994 Men’s Final Four Basketball Tournament held in Charlotte.

He is survived by his wife, Mary Elizabeth Roberts Adams and four children; Blakeney and Stephen of Monroe, Ellen of Belmont, John of Waxhaw; daughter-in-law Kristina of Weddington, and two step-children, Robert Brock and Dayna Brock of Charlotte. In addition, he is survived by seven grandchildren, four great-grandchildren and a brother, Dr. Joseph V. Adams (Dorothy), of Savannah, Ga.

Remembrances of Bill’s life may be directed to The Southminster Community Fund, 8919 Park Rd., Charlotte, N.C. 28210 or to the Adams Scholarship Endowment (founded by Bill and his wife, Mary Beth) in care of The Episcopal Diocese of Mississippi, 1118 Congress St., Jackson, MS 39225 or to Christ Episcopal Church, 1412 Providence Road, Charlotte, NC 28207.

Due to COVID 19 restrictions, the family memorial service will be on November 21st at 2:00pm at Christ Episcopal Church of Charlotte and will be live streamed.