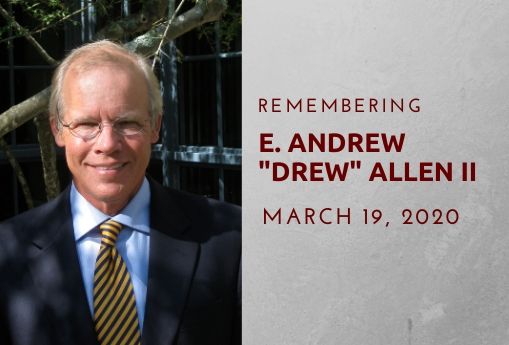 The MSU College of Business is saddened by the loss of COB Executive Advisory Board member and past board president Drew Allen, who passed away on March 19, 2020. He was 68. Allen is survived by his wife, Nancy (née Duckett); his daughter, Grace Gilmer Kennedy Allen Gauci (Joseph); his son, Andrew Mattison Kennedy Allen (Carmen) and son Darby James Kennedy. He is also survived by his beloved dogs Prince and Roxi. He was President and CEO of Allen Beverages, Inc., a Pepsi distribution company. Allen was a member of the Mississippi Gulf Coast Business Council and served on numerous boards including The Peoples Bank, Mississippi Soft Drink Association, The Nourishing Place, and The Word at Work. He served as an Elder at the First Presbyterian Church of Ocean Springs, past president/executive committee of the Pine Burr Council of Boy Scouts of America, board president of the Montessori Elementary School of Ocean Springs and served as Area Command Board Member of the Salvation Army. Allen received “The Others Award” from the Salvation Army, one of the highest-ranking honors for civic work, and was named College of Business Alumni Fellow in 2011. He earned a marketing degree from Mississippi State University in 1974.

In lieu of flowers, donations can be made in his name to Boy Scouts of America at pineburrscouts.com, Feed My Sheep at feedmysheepgulfport.org/donate, The Salvation Army at salvationarmymscoast.org, First Presbyterian Church of Ocean Springs at fpcosms.com, and The Nourishing Place at thenourishingplace.org. A memorial service for Mr. Allen will be held at a later date and time. Riemann Family Funeral Home in Ocean Springs, MS is serving the family.